At ISHCMC-American Academy we are proud of every child who becomes part of our positive and happy school community. Due to our inclusive and varied educational program our teachers are able to ensure that all students at ISHCMC-AA are able to reach their potential and find success both at school and in their homelife.

Due to our rigorous curriculum and SUPA program many of our children are also able to gain academic  achievements that will expand their future opportunities by gaining a place at a university or college abroad. In recent years our top students have been able to experience a higher education and adult life in countries located right across the world including the UK, America, Canada and Australia.

It immensely satisfying to be able to showcase some ISHCMC-American Academy graduate stories here:

Due to a great deal of hard work and her success in many examinations, Selena was admitted for the early admissions program of Northeastern University. The four year study and research process, combined with the strict American curriculum at ISHCMC-AA that included university level AP Analysis, have all contributed to helping Selena achieve her goals and reach her full potential. At Northeastern University Selena studied International Business and Marketing with her eye on the exciting goal of working within the garment industry.

“I have known Selena since she joined ISHCMC-American Academy as a ninth grade student. I have witnessed her transform into a confident young woman who can collaborate and lead the school community. While at school, she was able to strengthen her English skills, which had a positive impact on both her academic and extracurricular life. It was wonderful to hear that she was accepted into her first choice: Northeastern University. She has set a great example to all of our students and we wish Selena all the best in her future endeavors.”

“Selena has been a marvelous student during her time with us. She is a true leader in our College and University Curriculum. Her role included working with representatives to coordinate career groups. She shined as the leader on this exercise and developed her leadership skills more than she thought she could. We are all delighted that her hard work and determination have paid off and that the students of ISHCMC – American Academy continue to be excellent students recruited by American universities.”

Annie impressively received seventeen credits from Syracuse University while still in high school at ISHCMC-American Academy. Annie achieved these results after completing year-long courses in Biology and Analysis, enabling her to enrol and attend the University of Cincinnati in Ohio, where she is now studying physiotherapy.

What Annie said about SUPA courses at ISHCMC-AA

“Taking SUPA courses really helped me excel in my studies. In my freshman year when all of my classmates had to take General Biology, I was already one year ahead of my scientific research sequence.”

Tien was our Valedictorian in 2014 and she successfully competed against many other international students to win a scholarship at the University of Kentucky, where she is currently pursuing degrees in Architecture and Pre-Medicine. Tien was well prepared for her challenging future after taking a series of Advanced Placement courses and the Syracuse University (SUPA) credit program at ISHCMC-AA.

What Tien said about SUPA courses at ISHCMC-AA

“Taking SUPA classes is the best preparation for college, because not only I was able to get ahead, but I also learnt to experience the feeling of doing college-level homework, becoming more independent with my studies and speeding up to work on time.”

“I still remember when Tien applied to colleges and universities in the States. Admissions representatives from various universities called me, asking me, “Why has Tien chosen us?”. She has been admitted to many schools with outstanding programs and we have been talking regularly for a while when she was weighing the benefits of each option. It is encouraging that she has chosen a school and a program that is right for her. I look forward to seeing her again this summer”

Quang Minh is now studying Physics and Mathematics at the University of Toronto after graduating from ISHCMC-AA in 2013. Quang is happy to share his experience and encourage fellow ISHCMC-AA students to take university-level courses while they are still in high school to gain credits earlier and thus become a prominent candidate in the college admissions process.

What Tien said about the University of Toronto:

“I really enjoy studying at the University of Toronto. Founded in 1827, UT is one of the oldest universities in Canada and is consistently ranked among the top 20 universities in the world. The school is located in Discovery County, an area of ​​downtown Toronto where many educational facilities and research hospitals are concentrated. The city is also known as a hub of commerce, finance, industry and entertainment along with New York, Los Angeles and San Francisco. Toronto’s international atmosphere is clearly reflected in its cuisine. I can find any European or Asian food and even my favorite Vietnamese meals without going too far from my accommodation. However, I usually like food in university dormitories because food outside can be expensive. A large, hot noodle bowl from a restaurant costs $ 10, which is almost eight times the price in Saigon.

What Tien said about studying at ISHCMC-AA:

To all the seniors at ISHCMC – American Academy, I hope you will have a great school year and wish you all the best in getting into your dream university. For all AP students, I encourage you to take the AP exams; with a score of 4 or 5, not only do you have the opportunity to receive a scholarship, but also the chance to earn credits at many universities in North America and skip some typical first year university classes. Finally, I wish all ISHCMC – AA teachers a very successful school year.”

Jimmy earned 12 Syracuse University credits in Biology and Analysis while still in high school through ISHCMC-AA’s dual admissions program in conjunction with Syracuse University Project Advance (SUPA). In addition he also earned a standard score for Chemistry in the Advanced Placement (AP) course and a benchmark in Computer Science A. Jimmy is currently studying pharmacy chemistry at the University of California, Davis in the USA.

“During his middle school year, Jimmy took two Advanced Placement exams earning himself a qualifying score in Chemistry and Computer Science A. When Jimmy was a student here he earned 12 college credits in Biology and Analysis through our dual enrollment program with the Syracuse Advanced University Project”

What Tien said about studying at ISHCMC-AA:

“I have been studying at UC Davis for six months. Looking back on my time studying at ISHCMC – American Academy for four years, I can see that the teachers helped me develop skills to transition to university life through courses and activities that helped me develop my personal skills. All of these have boosted my confidence and improved my English skills. During school I was encouraged to take the AP and SUPA courses, which I strongly believe helped me transition to college life smoothly”. 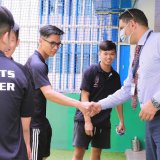 An introduction to the team at ISHCMC-American Academy 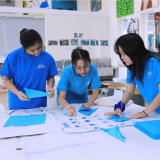 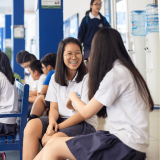 Experts establish the importance of wellbeing in education 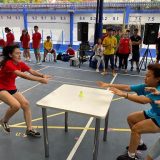 ISHCMC-AA taking education beyond the classroom